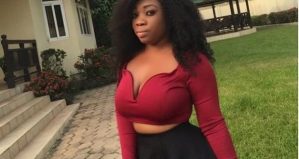 The Zulu king of South Africa, Goodwill Zwelithini is seeking to marry his seventh wife and has even gone further to state the name of the woman he wants to join him as his new better half as he continues to reign over the kingdom of Zulu.
Reports say the Zulu king has singled out heavily endowed Ghanaian actress Moesha Buduong as the woman he is seeking to make his seventh wife.
Sources are suggesting that king Zwelithini is planning a visit to Ghana to meet the family of the actress as custom demands.
If the Zulu king has his way, the pretty actress will become his seventh wife after he married his sixth spouse, Mafu, who was selected as the king’s bride at the age of 18 while participating in the 2003 Swazi reed dance.