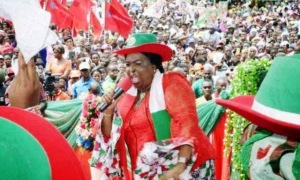 First Lady Patience Jonathan, says Aishat Buhari, wife of the presidential candidate of the All Progressives Congress (APC), has been going about deceiving Nigerian women.
.
According to TheCableng, the first lady said this on Tuesday when the campaign train of the Peoples Democratic Party (PDP) women birthed in Ilorin, capital of Kwara state.
.
“Don’t be deceived. Don’t look at any woman that comes here; don’t listen. They are just deceiving themselves because out of the abundant of the heart, the mouth speaketh,” she said.
.
“Their husbands have said that they would not carry women along and that there is nooffice for the first lady but now they want to deceive Nigerian women and she has come out to say ‘My husband said it in error’. Don’t worry, I’ll carry on in the traditional way. “Any woman that comes, tell her to go back. Don’t let any Nigerian woman deceive you.”The first lady said she ran into the entourage of Buhari’s wife at the airport but ordered her security details to avoid any possible problem. Alleging that the opposition party has been fomenting trouble, she advised women to shun violence and always embrace peace.
“I was in Edo state but before I got there, APC had gone. They went there just to make trouble,” she said. “I want to go to Kwara, they are there. Why do you want to go to Kwara? It is to make trouble. Trouble is not good for women. “They ran to the airport so that PDP will clash with them, but I told my security people that I am Mama Peace, I don’t kill, I don’t stone people. Please let them go with their problems. “It is not the women that are contesting elections but our husbands and all we can do is to pray for them to succeed. As wife of leaders, we should be careful and avoid allowing ourselves to be used.”Buhari’s wife visited Kwara state on Monday.