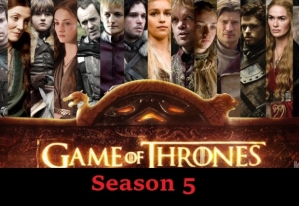 The next season of Game of Thrones premieres in just a few weeks, but fans got an early look at what HBO has planned for its hit series with a new Season Five trailer that premiered this morning at Apple’s Spring Forward event. However, if you missed the big unveiling that followed news about Apple’s exclusive new deal with HBO Now you’re in luck, as an unofficial version was posted on YouTube shortly after the event.

Set to premiere in April, the new season is expected to draw heavily from the fourth and fifth books of George R.R. Martin’s “A Song of Ice and Fire” series — and the collection of scenes showcased in the trailer seems to support that notion. Along with the all to familiar mix of violence, sex, and the carousel of shifting alliances among the various families and key figures in the saga, the new season appears primed to bring flying, fire-breathing dragons into the spotlight.