Posted by 9jasouth on 03/13/2015
Posted in: ENTERTAINMENT, GIST. Tagged: Ashanti, Ashanti Opens Up On Break Up With Rapper Nelly After 10-Yrs Of Dating, Rapper Nelly. Leave a comment 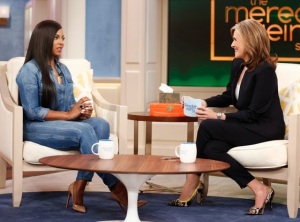 The 34-year-old star sat down with talk show host Meredith Vieira to talk about dealing with a long time stalker and breaking up with fellow hip-hop performer Nelly.

On parting ways with her rapper beau after nearly 10 years of dating.

The duo called it quits last year, and while the nitty-gritty details behind their split were never really revealed, the singer explains to Vieira that it basically came down to trust.

“I think sometimes when people have their own insecurities it allows them to act out of character. I’ve been betrayed,” she says. “Again, you just have to grow, you have to grow up and accept responsibilities for the things that you do. I’m not a big fan of people being cowards. I think it’s really important to know yourself and understand what you want and get it. I’m in a different place right now.”