Mother of triplets murdered by unknown men in Rivers

A woman, who recently gave birth to a set of triplets has been brutally murdered by unknown assailants while she was sleeping beside her children at her husband’s home in Rumuekini, Obio Akpor Local government area of Rivers State.

A mother of triplets has been denied the joy of watching her children grow as she was brutally murdered by unknown assassins in Rivers State.

According to a Facebook user, Theophilus Utchaychukwu, who posted the shocking incident on his wall, the woman was murdered on Saturday, September 10, 2016, after her husband, said to be a very popular community leader, had gone to a viewing center to watch a football match. 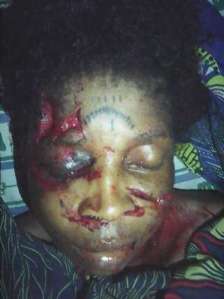 This is what Utchaychukwu wrote:

“It was a sad day on the 10th of September, about 9pm on a Saturday, in Rumuekini, a community in Obio-Akpor.

A mother of a set of triplets was assassinated by unknown murderers. Her husband, a popular man in the community, Mr. Mboy Amadi aka (Man Kasy), was shocked when he heard of his poor wife’s death.

It was gathered that while Amadi was away to watch a live football match in a viewing center, unidentified persons entered his house and stabbed his wife, while she was in bed asleep with one of her children, a little girl beside her.

The little girl woke up to notice a warm sticky fluid dripping and discovered it was her poor mother’s blood.

She ran as her poor little legs could carry her to call Mr. Mboy Amadi from where he was watching football at the viewing center and informed him innocently that her mother was vomiting blood.

Her father rushed home with her and carried his wife to a nearby clinic where the doctors on duty certified her dead.”