Woman Kills Husband So She Can Marry His Brother [Photos] 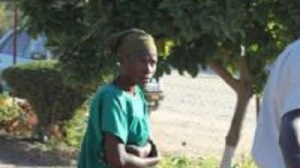 The 32-year-old Zimbabwe woman, has been remanded in prison custody after a court heard how she connived with her husband’s brother, Witness Maphosa, her secret lover, to murder her husband, Knowledge Maphosa, so that she could continue sleeping with the brother, reports MyZimbabwe.

Moyo and Witness were charged with premeditated murder of her husband after he became aware that the two were sleeping together.

Court records show that Witness lived in the same house with his brother and his wife, with the husband not knowing that his wife and brother were sneaking around behind his back.

According to the report, Moyo allegedly paid Witness the sum of $40 dollars to snuff life out of her hsuband so that the coast would be clear for them to continue their adulterous affair on June 2, 2015, and the lovers hatched a plan to eliminate the older Maphosa.

The next day, they sneaked into the hut where the elderly Maphosa slept and Witness got hold of an axe with which he struck Maphosa three times on the head, opening his skull.

Afterwards, they placed a rock over his head and covered the body with clothes. Moyo then sprinkled mealie-meal over the blood, locked the door from outside and disappeared into the night.

Moyo was arrested few days later when she would not return home and during interrogation, she implicated Witness, who was subsequently arrested.