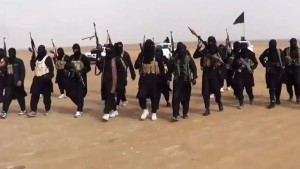 The ISIS group has welcomed a pledge of allegiance made to it by Boko Haram, and have expressed intentions to expand its influence to West Africa.
ISIS through its spokesman, Mohammed al-Adnani, made the declaration via an audiotape released on Thursday, AFP reports.

“We announce to you to the good news of the expansion of the caliphate to West Africa because the caliph… has accepted the allegiance of our brothers of the Sunni group for preaching and the jihad,” al-Adnani said.

In the 30-minute tape, the spokesman of the terrorist group further urged Muslims to join militants in West Africa.
On Saturday, an audiotape was released by Boko Haram in which the group’s leader Abubakar Shekau stated “we announce our allegiance to the Caliph of the Muslims, Ibrahim ibn Awad ibn Ibrahim al-Husseini al-Qurashi,” referring to IS leader Abu Bakr al-Baghdadi.